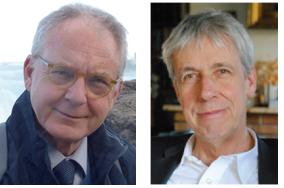 The ENTIS Board are delighted to announce that Professor Christof Schaefer of Berlin TIS and Professor Maurizio Clementi of the University Hospital of Padova TIS have been awarded honorary ENTIS membership for their outstanding contribution and support of the European Network of Teratology Information Services.

The awards were presented on behalf of the ENTIS board by the ENTIS president Dr Laura Yates during the 2019 annual conference in Oslo.

Professor Schaefer, a founding member of ENTIS and former president (2006 to 2009), was in attendance to accept the honorary membership in person. Professor Clementi, the founder of the University Hospital of Padova TIS and former ENTIS president (1997 to 2005) was unfortunately absent from the meeting, but the award was presented to his long-term colleague Dr Matteo Cassina.

Congratulations once again to Professor Schaefer and Professor Clementi, we look forward to your continued input into our network as honorary members, and hope to see you at the next meeting.