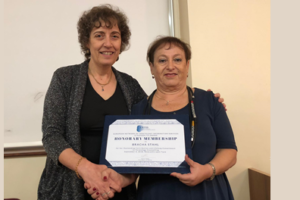 The ENTIS Board are delighted to announce that Brachia Stahl, Beilinson Teratology Information Service (BELTIS), has been awarded an honorary ENTIS membership for her outstanding contribution and lifelong commitment to teratology counselling.

The award was presented on behalf of the ENTIS board by Dr Orna Diav-Citrin during a Teratology Symposium which was assembled in Bracha’s honour and hosted at the Assaf Harofe Medical Centre in Zerifin, Israel. Present at the symposium were many of Bracha’s colleagues and family members, which proved an emotional occasion for all.

Congratulations once again to Bracha, we look forward to your continued input into our network as an honorary member.