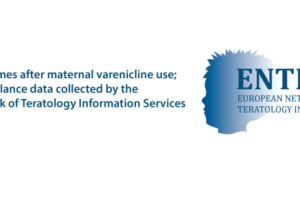 A collaborative ENTIS study recently published in Reproductive Toxicology (Volume 67, Pages 26-34) has provided no signal that varenicline is a major human teratogen.

This collaborative ENTIS study was undertaken by researchers based at teratology information services in the United Kingdom, Israel, France (Paris), Germany (Berlin), Australia, the Netherlands, Finland and Turkey (Izmir), who collectively joined data from over 400 pregnancies to investigate the risk of adverse pregnancy outcomes following maternal varenicline use.

The main objective of the study was to compare major congenital malformation rates between varenicline exposed and non-exposed control pregnancies, with secondary objectives of comparing the spontaneous abortion, elective termination, intrauterine fetal death/stillbirth and live birth rates between these groups.

Seven live born infants delivered by women who used varenicline during the first trimester had congenital malformations; two were considered major and five minor using EUROCAT congenital anomaly classification guidelines. The major congenital malformation rate among the varenicline exposed pregnancies (n=2/89, 2.25%) was considered in keeping with the expected background rate, and although non-significantly increased in comparison with non-teratogen exposed controls, the rate was similar to that observed among the nicotine replacement therapy or bupropion exposed controls.

In conclusion, these results do not suggest that first trimester in utero exposure to varenicline be associated with a substantially increased risk of congenital malformations. However, the study sample size was small which produced imprecise risk estimates and the majority of the varenicline exposures occurred during the very early stages of pregnancy. As such, limited conclusions regarding the teratogenicity of varenicline can currently be drawn and therefore its routine use during pregnancy cannot be recommended. Inadvertent use of varenicline during early gestation does not justify termination of pregnancy, but a detailed ultrasound examination should be offered to confirm normal morphologic development in cases of first trimester exposure.